A Strenuous Hike Up Zwölferhorn Mountain 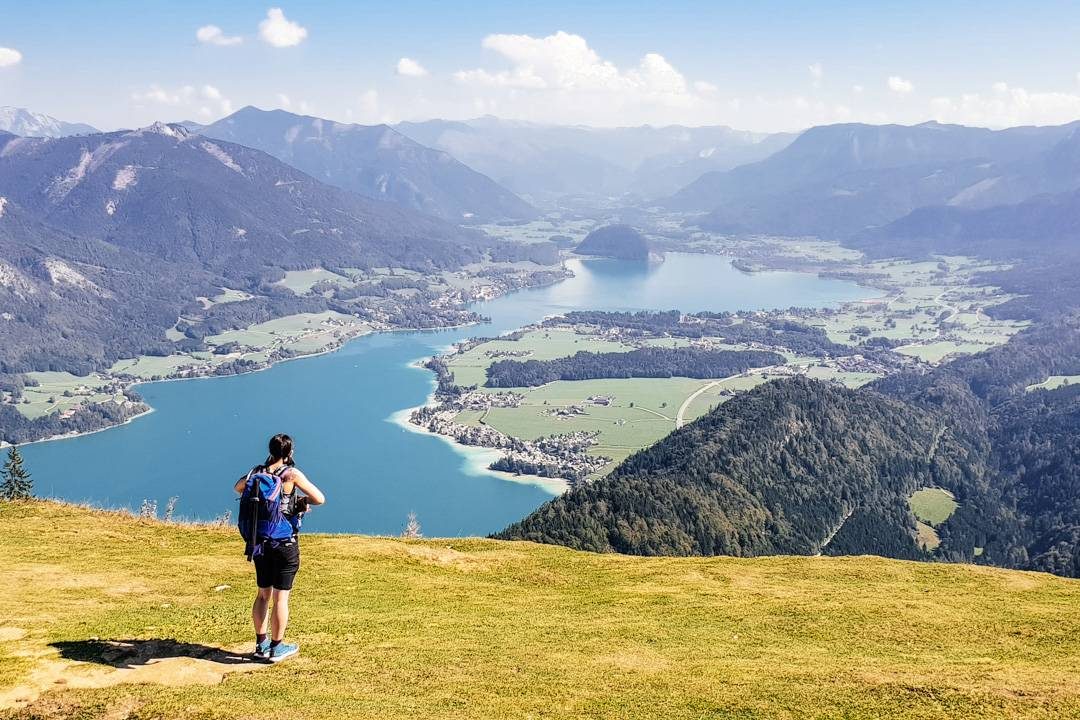 In the morning sun the heat was excruciating. It made hiking up Zwölferhorn even harder than it already was, and each time we hit a patch of shade, we both let out a sigh of relief. Eventually, under the cover of the forest, we found shade. But with the forest came the ascent and with each footstep, the climb became steeper.

As I stood under the shade of the trees, hints of sunlight twinkled through the leaves. I looked back down the hill. It was too steep to walk down, but the ascent was becoming almost vertical. It was a no-win situation, I had to keep climbing. My knees wouldn’t take the pressure of the downhill, so the kindest act for my body was to continue upwards. But at that moment, I wanted to cry.

With my body tipped forwards, I powered myself up the mountainside. After a few minutes, a slope emerged on the left with wooden steps embedded into the mud. 8-year old Lorna had to see where they led, so I made my way over and climbed them. At the top, there was an Alpine hütte and the most amazing view of Wolfgangsee so far.

With sweat dripping down the back of my neck, I stood in the hot morning sun, admiring the sight before me. I took some photos (okay, I took a LOT of photos), ate some trail mix, then drank what felt like a gallon of water. My body was definitely feeling the difficulty of the hike.

But in the stillness of that moment, it all felt worth it.

We had two more days until it was time to go home and I was feeling a little sad. It had been such an amazing trip, and with our last day looming, I felt deflated about returning home.

The plan was to visit St. Gilgen, take the cable car to the top of Zwölferhorn, hike for a couple of hours and then get the cable car back down – taking in the views in the process. But as we parked up, I saw hikers heading off towards the bottom of the mountain. For all I knew, they could have just been exploring the area – but in my head, they were all hiking up Zwölferhorn. They were certainly equipped for it.

In that moment, I decided we should climb the mountain too. It was high – yes, but as we looked at the map, it looked doable. We could hike up, have a walk around at the top and get the cable car back down like we’d originally planned.

How difficult could it be?

A quick search on Google showed the hike as 1 hour 8 minutes long. That sealed the deal. So off we went, following in the footsteps of the other walkers. Afterwards, I discovered the estimated time was highly optimistic and it was also the wrong walk. Whoops. My bad.

Everything in Austria is signposted and clearly labelled with a walk number. This means you can follow the bright yellow signs and keep track on a map, making sure you’re heading in the right direction. The walk number was marked as 855 and pointed us off the main road, towards a street of houses. They looked like something out of a story book, with traditional wooden frontages and quaint balconies. Many were dressed in an abundance of flowers, on display for all to see.

Zwölferhorn is 1494m high, making it 149m higher than Ben Nevis in Scotland. And with an estimated time of 2.5 hours to scale it, you can see why the 1 hour 8 minutes I saw on Google seemed a little optimistic.

Even from the first part of the ascent, we were met with some magnificent views of St. Gilgen and Wolfgangsee. As we continued upwards, we realised just how steep and tough this walk was going to be. Yet we kept on climbing. Each time we turned around, the view of Wolfgangsee with the hazy sunshine enveloping the mountains and the glistening turquoise water of the lake, looked more and more glorious.

The hike became increasingly steeper. But by now, it was too far to go back down. We were hiking through the forest and there was no other way to go but up. The further up we got, the more people we passed walking down. They all had poles – something we’d managed without so far on our trip – yet now I wished we’d bothered to pack some.

The higher we climbed, the more we became exposed to the elements of the sun, as the cover of the forest slowly disappeared. Coping with the mid-day heat became more difficult, and the longer I spent out of the shade, the more I dripped with sweat. The path continued underneath the cable cars, so we stood for a few minutes watching them pass by overhead. But the heat from the sun became almost unbearable and I was starting to look like I’d run a half-marathon.

As we followed along the path, we found ourselves once again entering the forest and under the shelter of the trees. Like a waft of cool air from an open refrigerator, the shade from the foliage was pure bliss. We carefully stepped over branches and watched leaves float gently from above, before softly landing on the ground.

After leaving the shelter of the woodland, we walked up a track leading towards another Alpine hütte. We found a spot nearby in the shade, opened our sandwiches and decided to take a break and eat lunch. Customers from the hütte enjoyed a beer as they basked in the afternoon sun, while hikers passed us by as they trekked back down the mountain.

We watched the cable cars travelling up and down Zwölferhorn, each carriage full of people admiring the magnificent views. I felt warm and fuzzy as I watched the world go by.

Seeing the Top of Zwölferhorn

By now, we could see the top of Zwölferhorn. Finally, there was an end in sight – but the climb wouldn’t be easy. It was steep, and we were passing more and more walkers, all zig-zagging their way back down. As we huffed and puffed our way up the mountainside, they looked at us as if we were crazy. Strenuous didn’t cover it, and I just kept putting one foot in front of the other, willing myself to keep going.

By this point the forest was long gone, and we were fully exposed to the afternoon sun. It shone brightly in the clear blue sky, and I could feel my shoulders burning. Thankfully, there were also a few other crazy people hiking up, and I felt a strange sense of satisfaction from seeing the look of pain across their faces.

I kept my head down and powered on, repeatedly telling myself there wasn’t far to go. We passed through more woodland, and when we reached the other side there was a wide-open space where some bulls were casually lazing in the hot sun. I put on my brave face and calmly walked past them, making my way towards the edge of the mountain.

And then there it was, in all its glory: Lake Wolfgang. The turquoise waters glistened down below, and it was by far the most magnificent view of the lake we’d seen on our trip so far. The hike up Zwölferhorn had been worth it, and in that moment, I forgot all about the uphill struggle.

We stood for a few minutes admiring the view, before re-joining the trail and walking the last part to the top. Passing directly underneath the cable cars, I couldn’t resist getting some photographs looking back down the mountainside. It was difficult to comprehend the height we’d just hiked, but it felt good.

Reaching the Top of Zwölferhorn

When we reached the top, it was absolute mayhem. The peace and quiet of the mountain was shattered into a million pieces, as Japanese tourists ran around with selfie sticks and voice recorders, taking photos and recording themselves. Barging our way through we headed towards the panoramic trail, hoping the crowds would thin out.

We walked along the track looking on in awe at the views, watching thick cotton wool clouds create shadows across the mountains. We were on top of the world!

Part way along the trail we saw the Pillstein Cross at the top of a hill. Once again we hiked upwards and when we reached the top, we were met with more incredible views. It also meant we could use the stamp and prove we’d hiked up to 1478m. I felt this was something to be proud of.

Triangular trees were scattered across the landscape and walking trails looked like they’d been scribbled into the canvas below us. We spent a few minutes enjoying the amazing views, before walking down the other side of Pillstein, and re-joining the main track. Making our way back towards the cable cars, we had one more climb to make – this time to the summit. A large cross marked the spot and standing at the summit, we realised that this was the best view of the lakes.

On Top of The World

Along the grass, paragliders lined up waiting for their turn to fly off into the wild blue yonder. While loved ones stood at the summit, breathing a sigh of relief once they’d safely made their jump. One after the other, each paraglider effortlessly soared through the air, making their way back down to the bottom of the mountain. And I couldn’t help but think what an amazing feeling that must be.

After we’d watched the last paraglider soar off into the clear blue sky, we headed back down to the cable car. The queue was long. With the last few cable cars of the day getting ready to leave, there were plenty of people standing patiently in-line. As the queue snaked its way past the bar and down the stairs, one-by-one, each person slowly shuffled forwards a few footsteps at a time.

After 20 minutes, we finally reached the front of the queue. To our dismay, we were put into a car with a mum and two young children. This was not my ideal scenario. They were noisy. And although she made a half-arsed attempt to quieten them down, she spent nearly the whole ride texting and staring down at her phone.

Apparently, the same great parenting skills were the same in every country and not just limited to the UK.

The view out of the front of the cable car was obscured by the two kids bouncing around, so I missed the shot of us approaching the cable car building. But the rest of the views were magnificent.

After paying for our cable car ride at the bottom of the mountain, we headed further into St. Gilgen to end our day with vegan ice-cream. It had become a tradition during our trip, and as we sat watching the sun glisten on the bright blue water, I couldn’t think of a better way to end our day.

We watched the boats bobbing up and down on the water, as the vendor tied them all together, before throwing his bike into the back and then climbing into the front. He started the engine and leisurely snaked his way along the lake, before returning tomorrow to do it all again.

As the last of the hazy sunshine started to disappear, we watched the boats until they were a tiny dot in the distance. The hot morning sun was a distant memory, as was the pain of the hike up Zwölferhorn. But I’m pretty sure my calves would serve as a reminder the next day.

Have you hiked up (or down) Zwölferhorn? 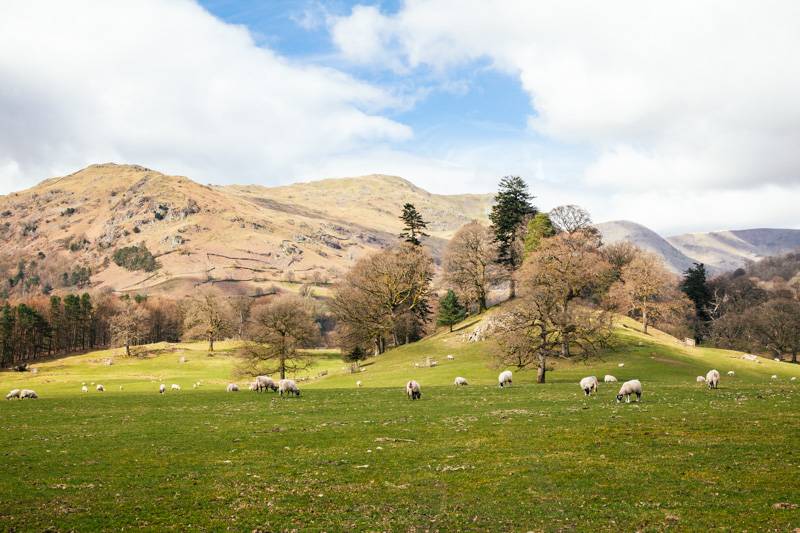 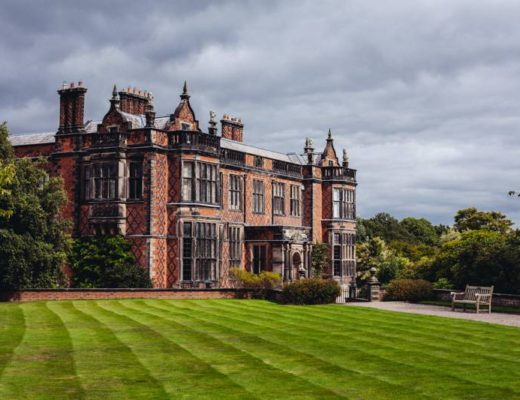 A Day Out At Arley Hall And Gardens 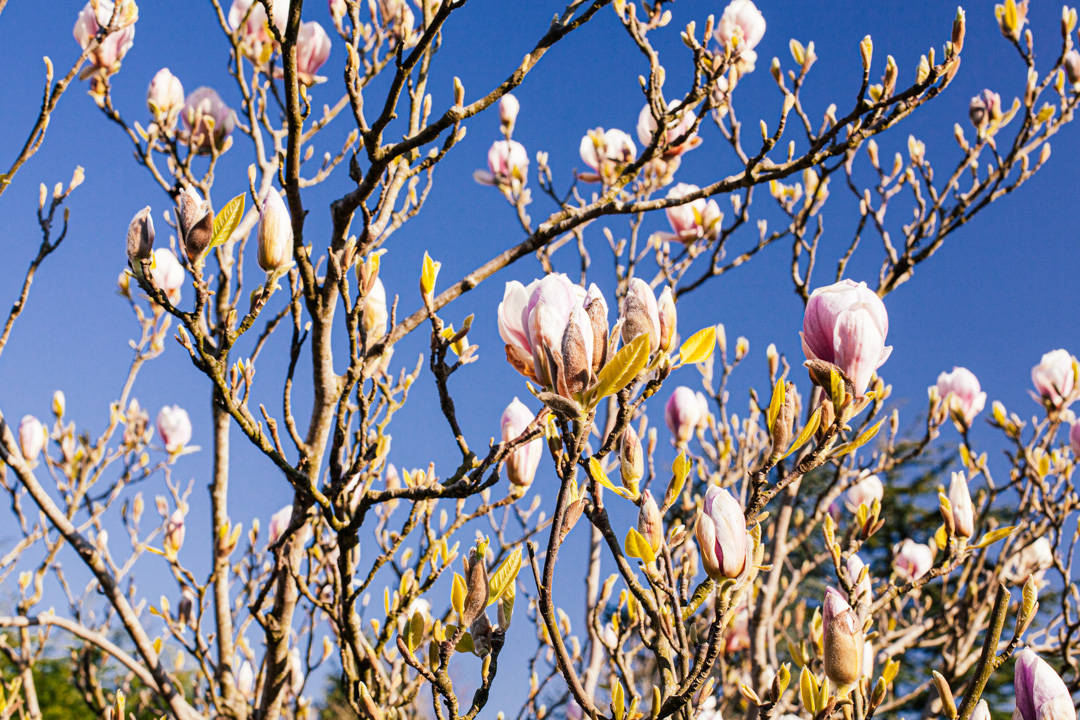