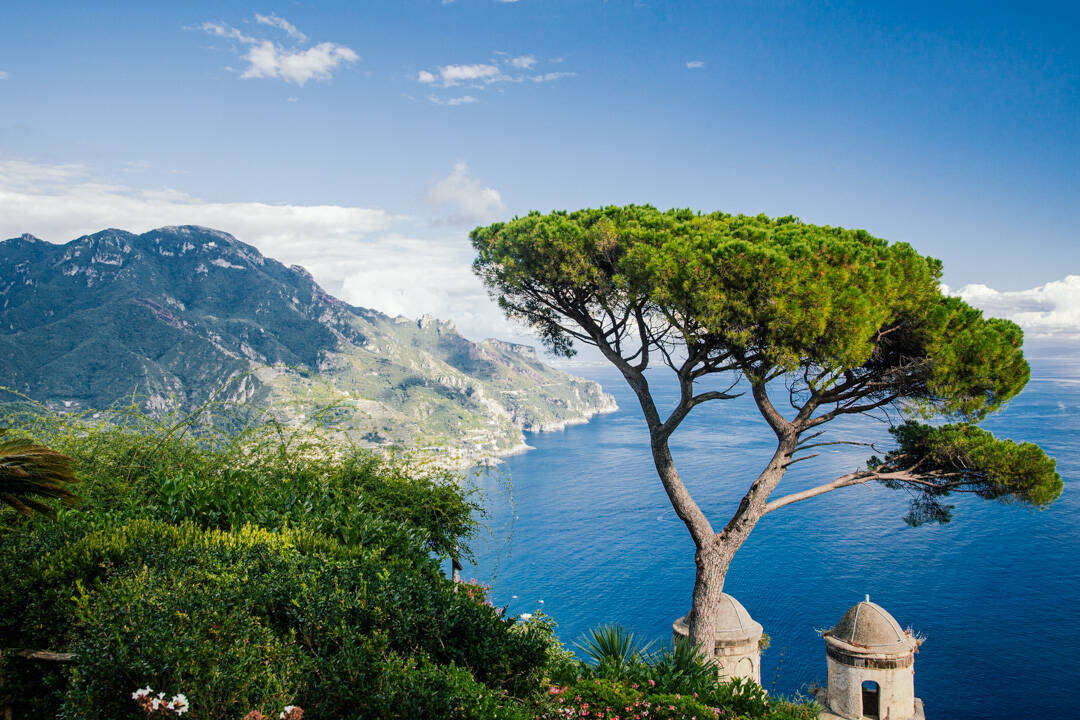 Friday 25th September 2015: After getting ready we still didn’t have a plan. We bickered. Ian was tired but wouldn’t fully admit it. He fell asleep in the chair and I did angry Zentangle.

This is an entry from my travel journal when we were in Italy. Every time I read it back I crack up with laughter. Mainly because I remember the whole incident so vividly – especially the angry Zentangle – which is quite ironic really. And considering I’d also done yoga earlier that morning, I was still considerably highly strung! Whenever we go away, whether for a few days, a week or longer, we’re definitely one of those couples that need a holiday to recover. Fitting in as much possible, we go out early in the morning and get back late in the evening. On that particular Friday, I think the combination of long days and hot weather had caught up with us. We obviously needed an easy day but I didn’t want to give in. I wanted to power through, much like a toddler refusing to nap. I see resting as defeat, a lunch is for wimps kind of mentality. But Ian, being much more laid back than I am, is always happy to have a day where we go with the flow and see what happens. I, on the other hand, am not too dissimilar to Monica Geller and put too much pressure on the notion of us doing something. Every. Single. Day. I have an itinerary and that itinerary needs to be met! 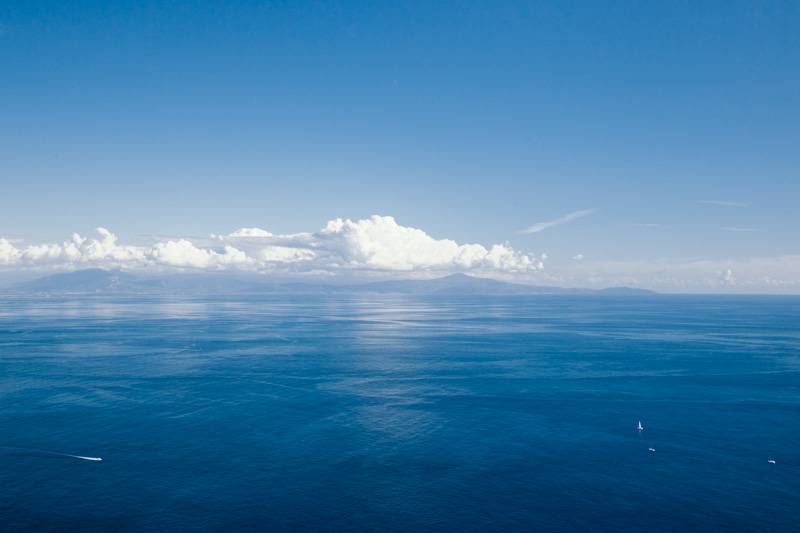 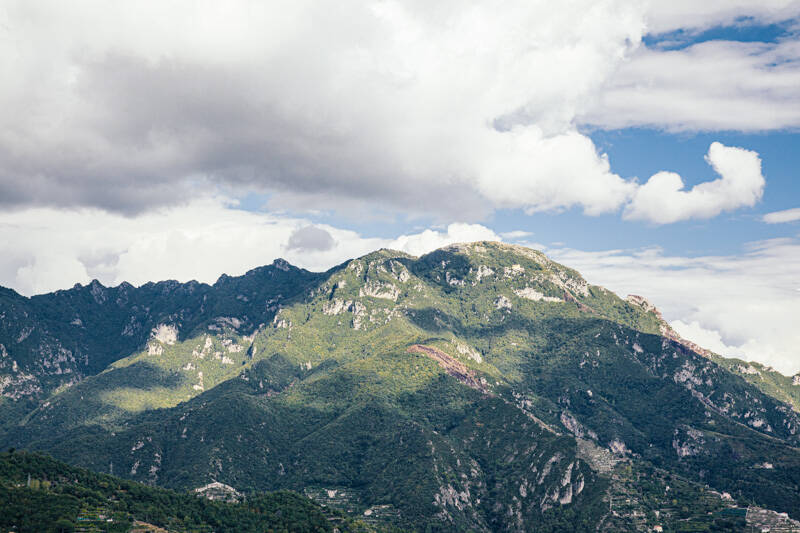 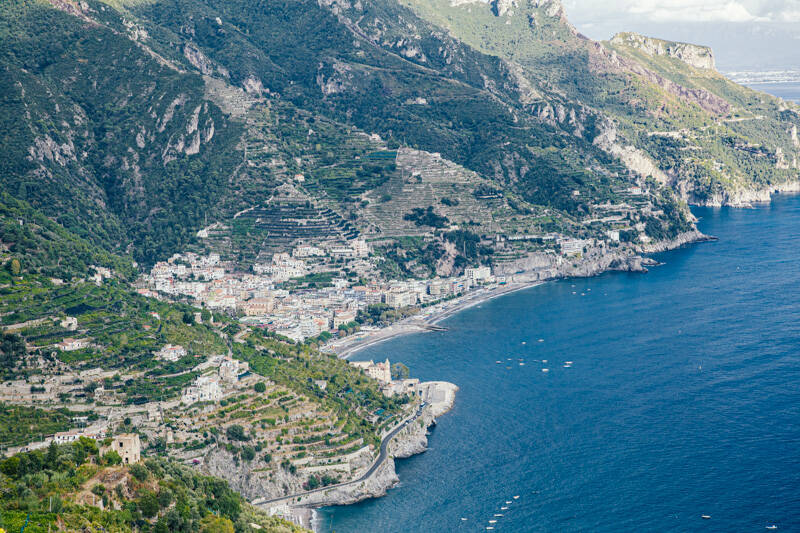 After Ian woke up and I’d finished shredding my sketchbook pages, we made a plan for the rest of the day. I’d heard positive things about Villa Cimbrone and Villa Rufolo, so after a hearty lunch, we drove over to Ravello. It was a Friday afternoon, and for a journey that should have taken approximately 30 minutes, it took almost double that. The roads were windy, heavy with traffic and the temporary lights in the roadworks took ages to change. But even under those conditions, nothing could drag me down. Angry Zentangle was a distant memory and with every twist and turn of the road, blue sky was holding our hand, leading the way. 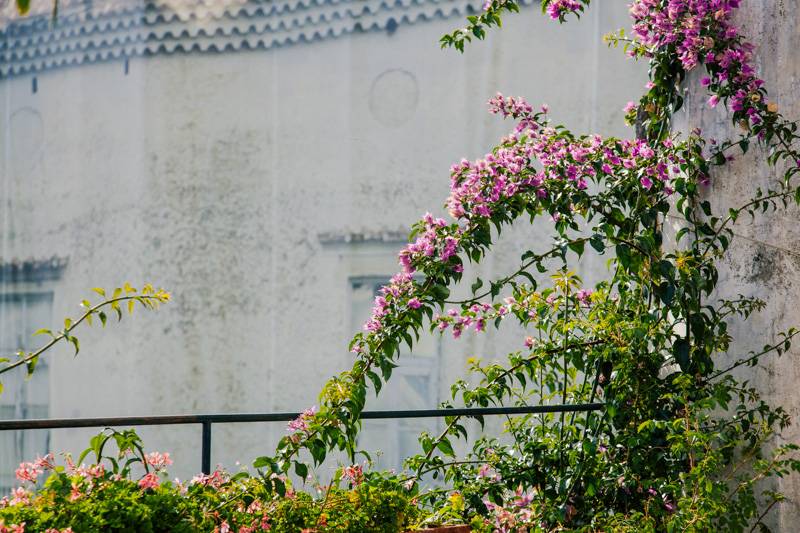 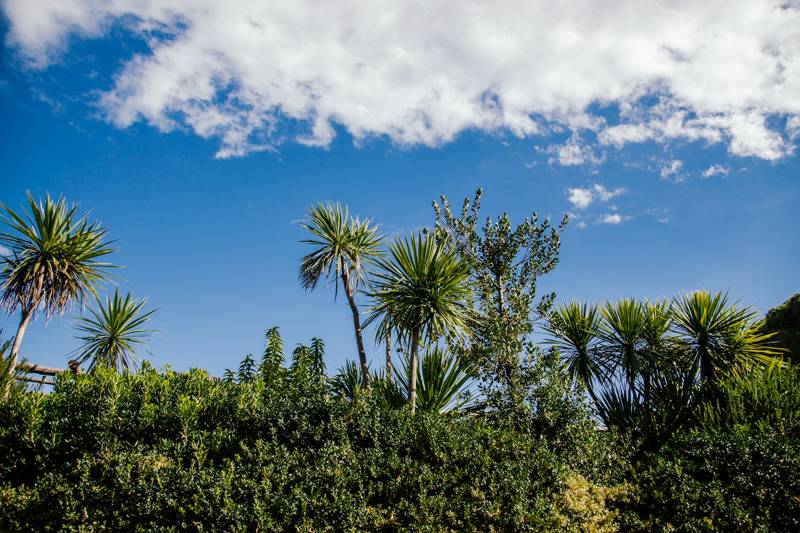 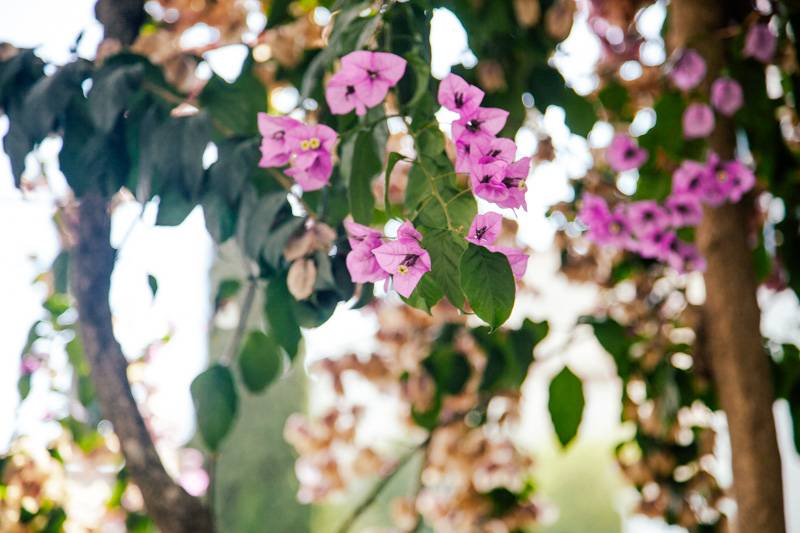 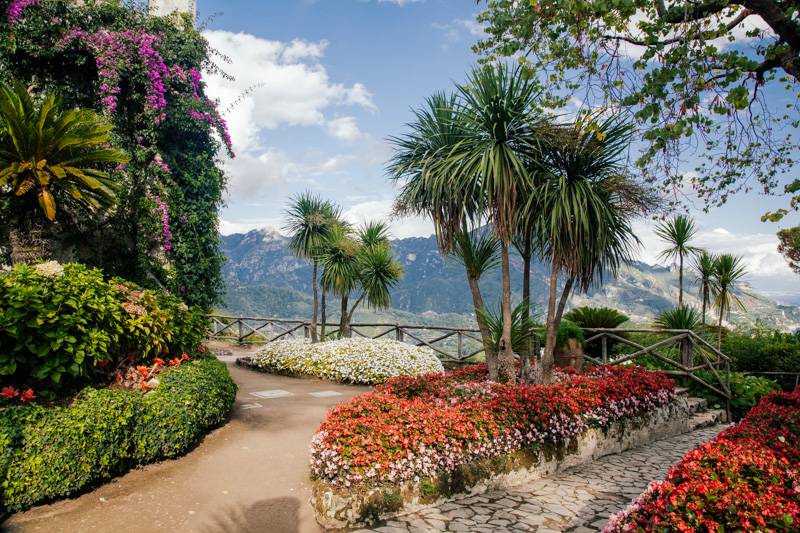 After finding our way to the car park, we set out on foot to explore Italy’s latest offering. We meandered down to the main piazza where we were met with rustic whitewashed buildings. Locals sat drinking Limoncello and a hotel nearby hosted a lively wedding. By sheer coincidence, we ended up sat next to one of the guests on our flight back to the UK. Originally from Latvia, she now lived in Manchester and had done for the past decade.

Our first port of call was Villa Rufolo, the entrance to which was through a tower, just off the main piazza. We’d heard good things about the gardens here, so were a little disappointed to find part of them closed off due to maintenance work. Even though they had a lovely array of flowers, I felt Villa Rufolo was more about the views than the gardens, and just like everywhere else on the Amalfi Coast, they were pretty spectacular. 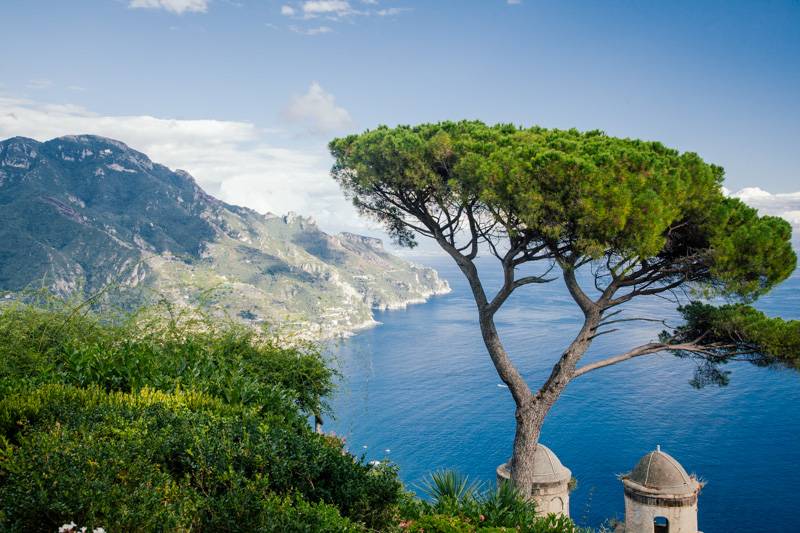 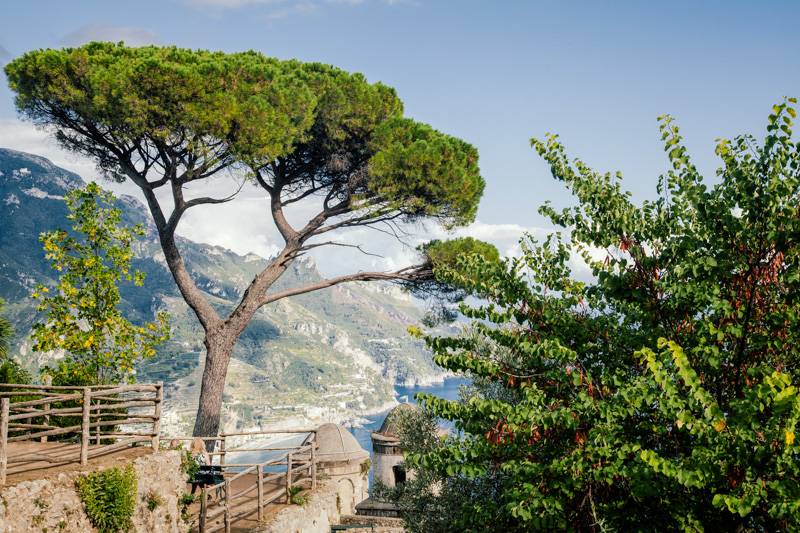 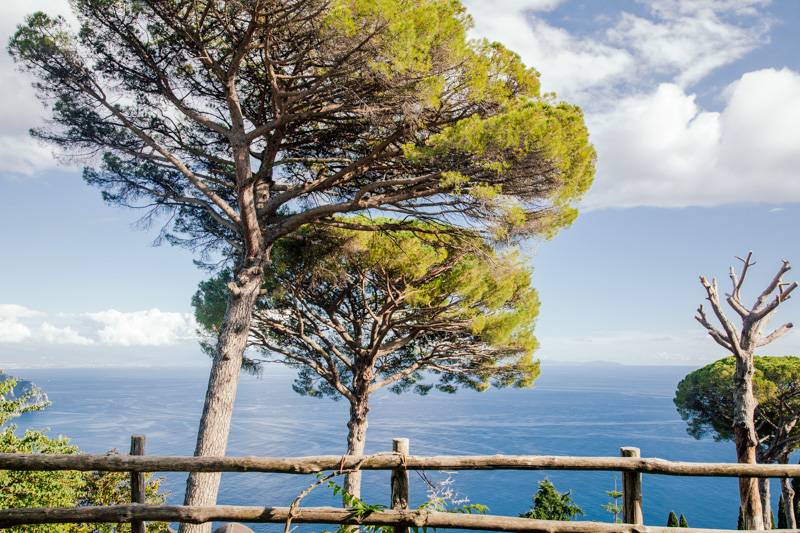 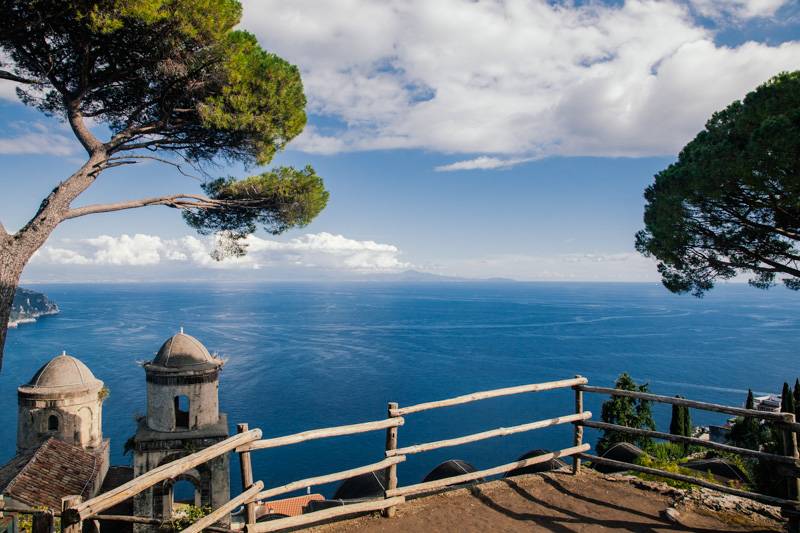 Although we were a little disappointed with the size of the gardens, they won back some brownie points when we stumbled into a photography exhibition. We were treated to an array of images, which included musicians such as Kate Bush, Bob Dylan, Lou Reed, Peter Gabriel, Bob Marley and many more. 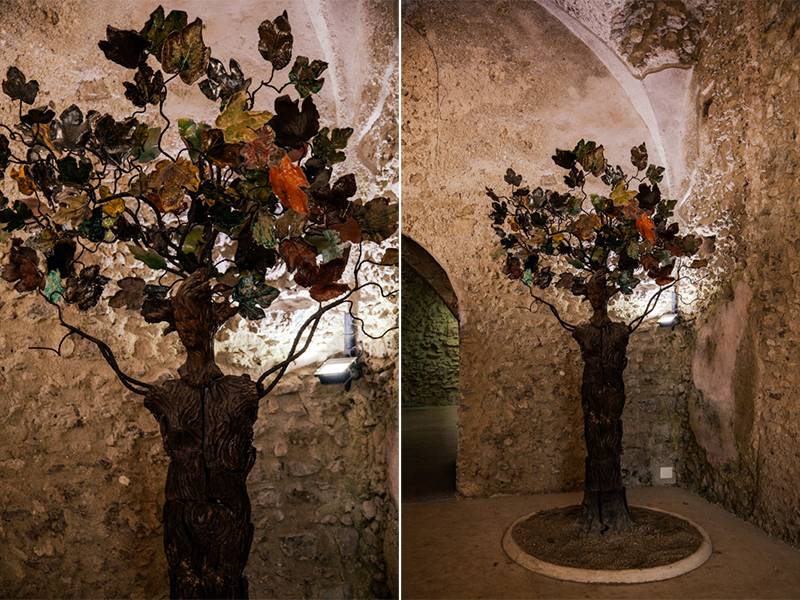 We left Villa Rufolo and set out to find Villa Cimbrone. A pleasant 10-minute walk away through winding streets, we were met with some form of foliage at every turn. The gardens were much bigger at Villa Cimbrone, but then being the grounds of such an impressive wedding venue, I shouldn’t have been surprised. 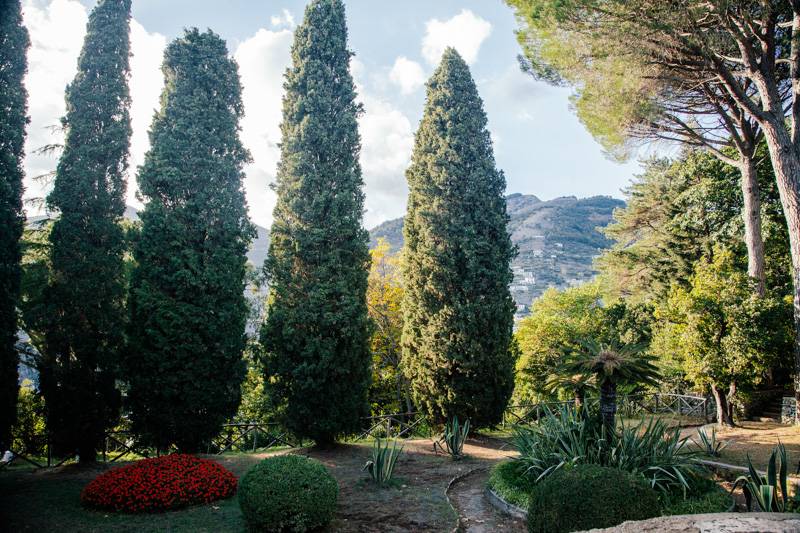 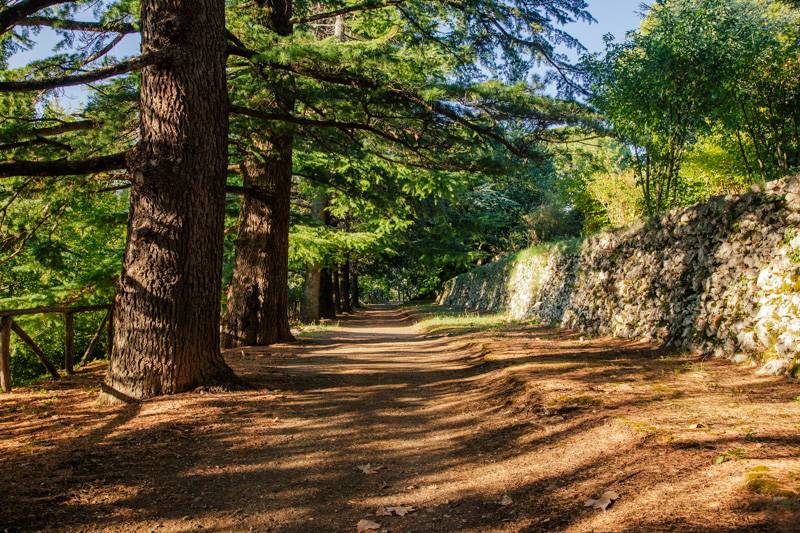 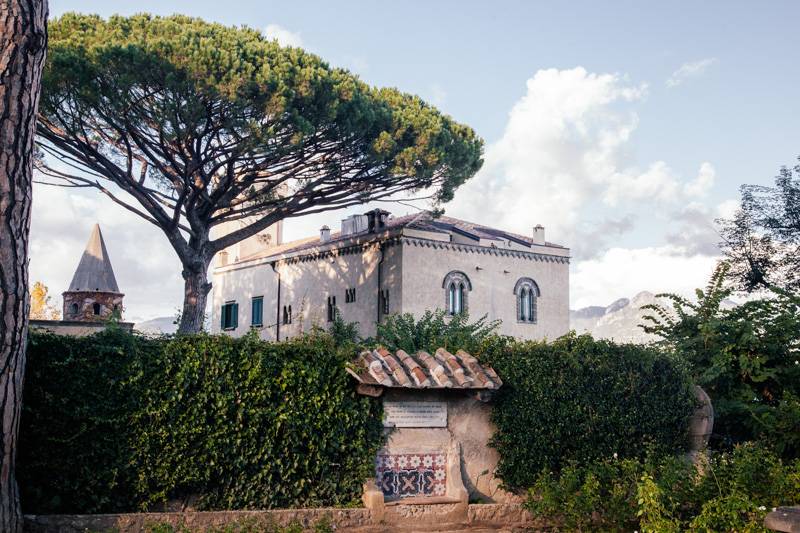 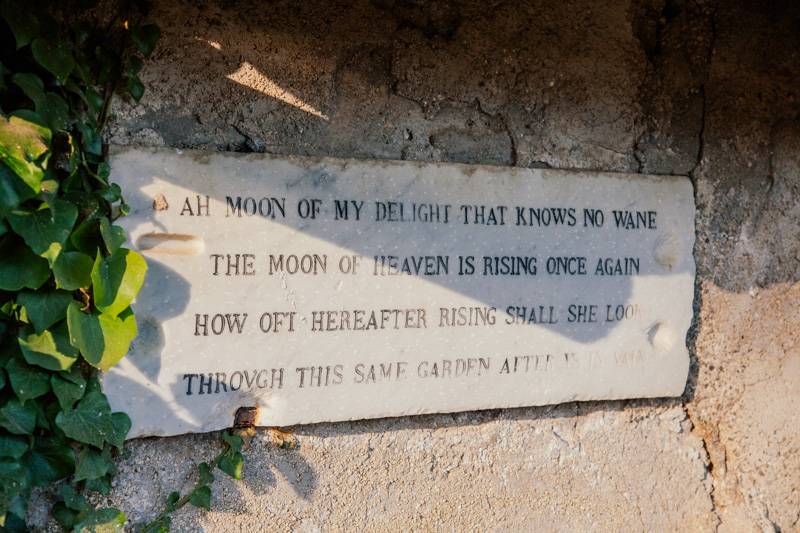 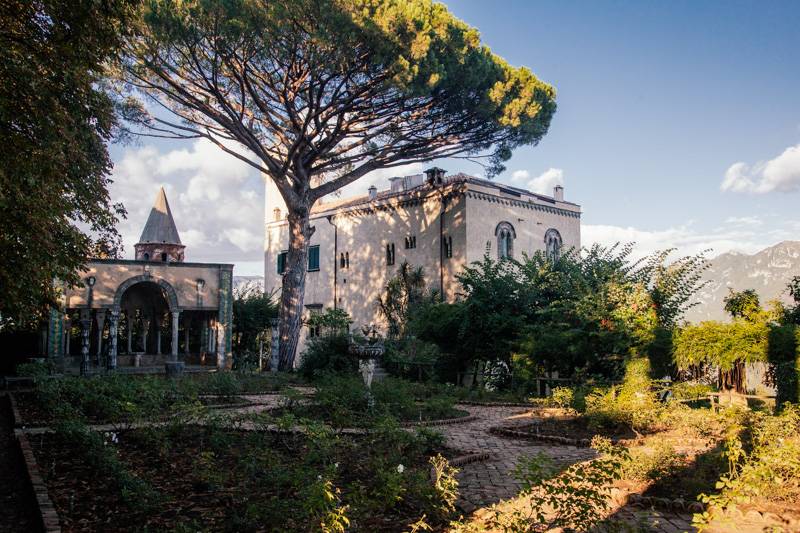 There was luscious green grass to walk upon, damp, earthy woodland to get lost in, shimmering leaves for the sun to twinkle through and of course, there were the views. Views of a hazy blue sky with cotton wool clouds and a deep blue ocean as far as the eye could see. A view which I could never tire of. 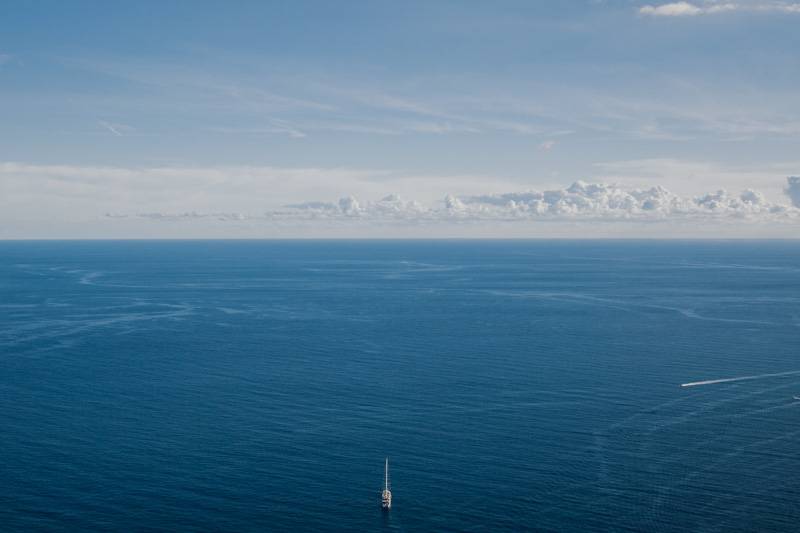 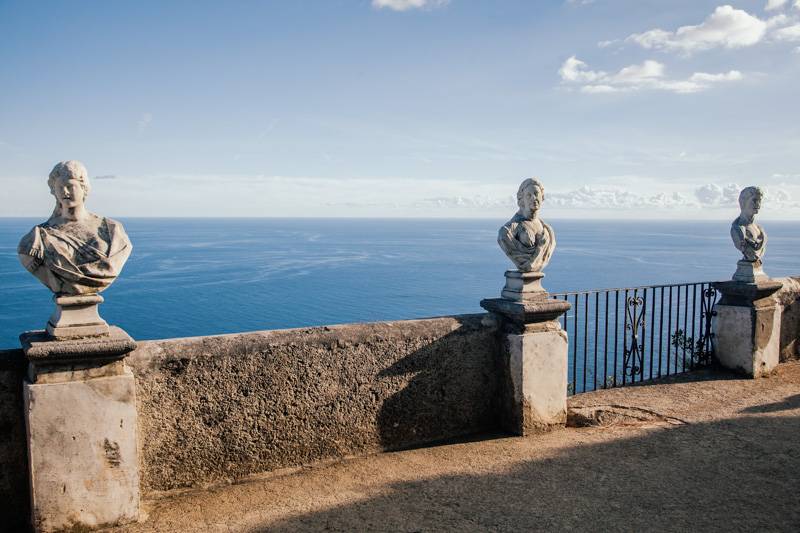 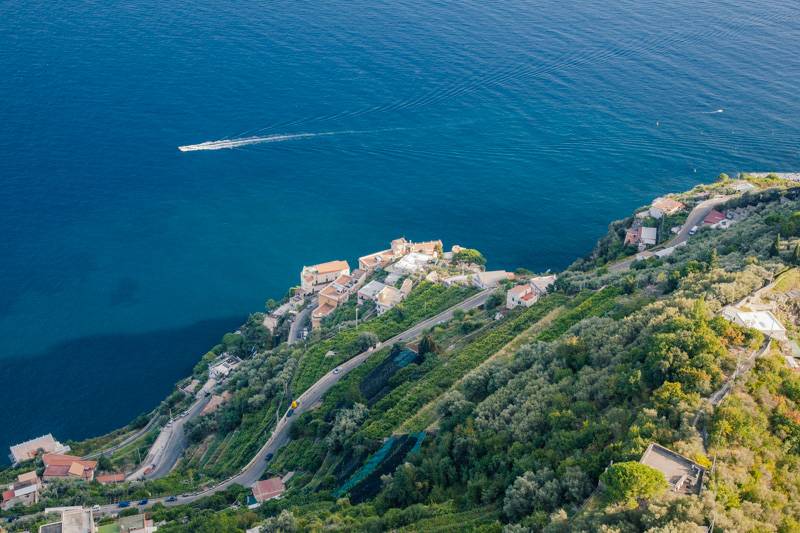 After the disappointment at Villa Rufolo, I hesitated before handing my money over here, and when the impatient woman at the kiosk glared at me from behind the counter, I think I did so out of fear more than anything else. I’m glad I did. It was a lovely end to what had started out as quite a shitty day. 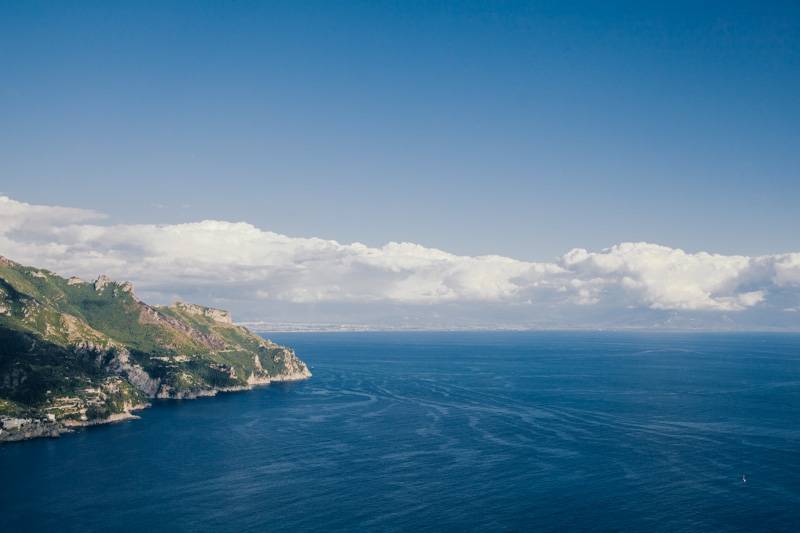 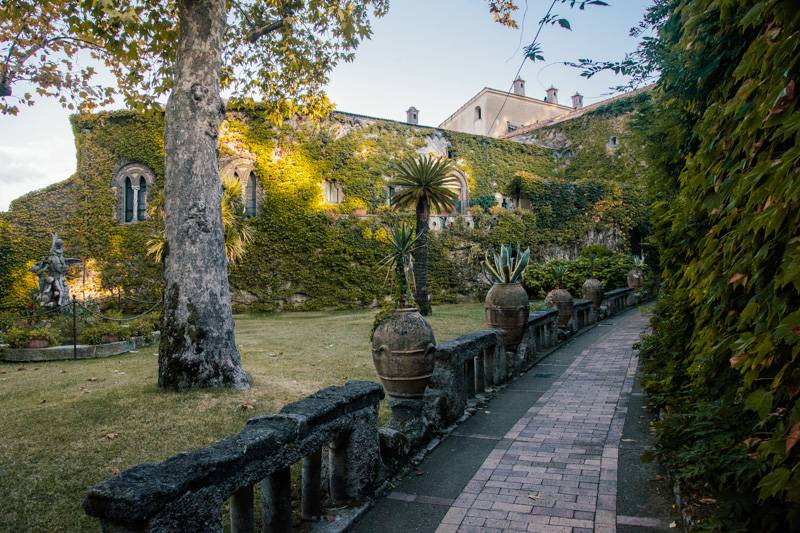 After leaving Villa Cimbrone, we meandered back through the winding streets with the intention of returning to the car, but part way down the hill we stumbled upon a Limoncello factory. Having been in Italy for 5 days already, we decided it was time to see what all the fuss was about and jump on the bandwagon. Not being big drinkers, we opted to sample a small amount, just to get an idea of taste. That, and the fact I was driving. Even though I had a sneaking suspicion it was actually lighter fluid, we took away a small bottle (20cl), with plans to drink it the following evening after returning from walking Path of the Gods.

Holding onto our new purchase, we found our way back to the car and headed out of Ravello. As we zig zagged back along the windy roads towards the familiar sight of the Amalfi Coastline, the sun was beginning to fade and the sky was losing its colour. We drove into Minori to grab something to eat and then made our way back home. By the time we reached Tramonti, the sky was almost black and the sun had disappeared completely, taking with it any traces of bickering and angry Zentangle.

If you missed part I of my Italy trip, you can catch up here. 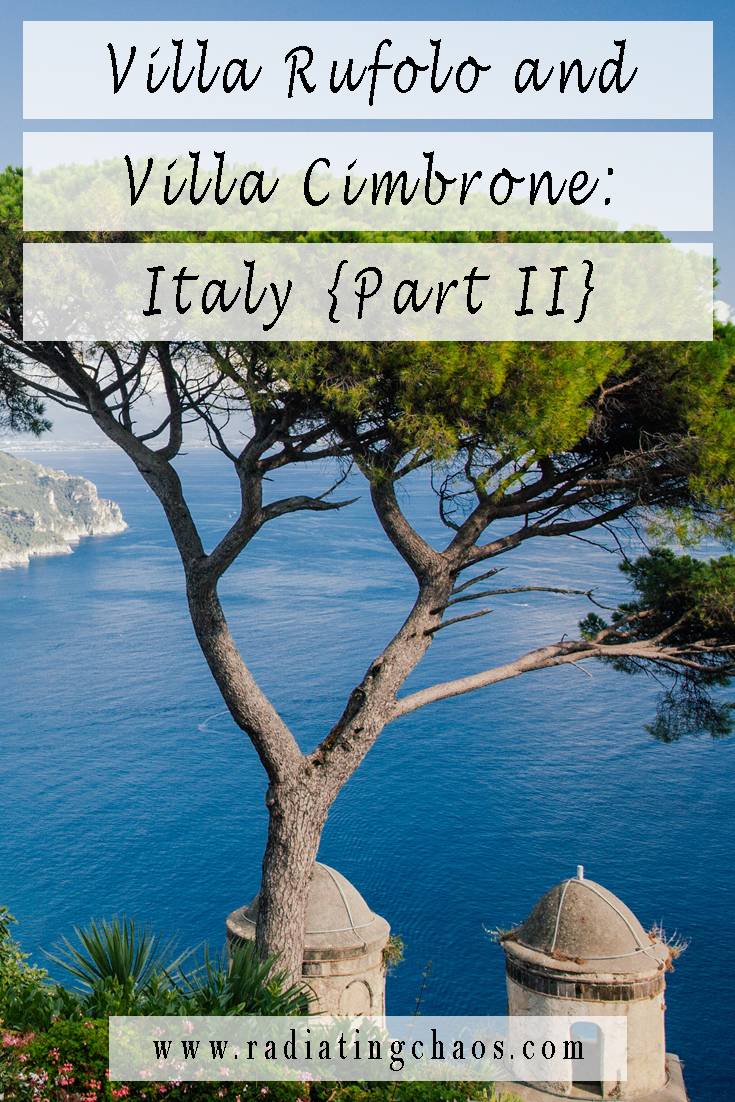 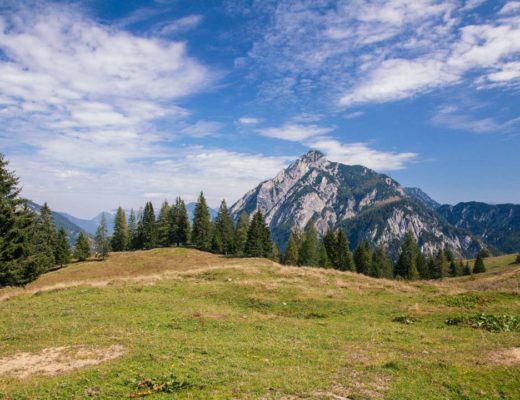 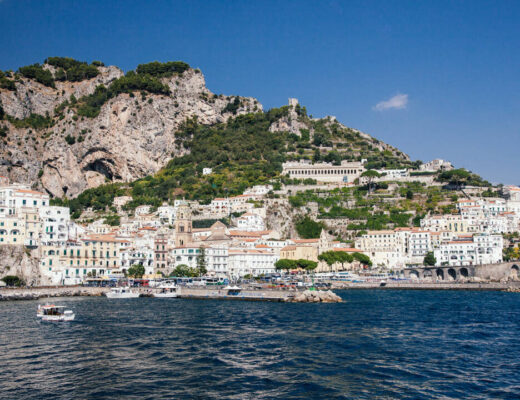 Find Out The Cost Of My Trip To Italy: Facts & Figures {Part VI}

A damp, drizzly & overcast 10k this morning. It wa

I'm running solo 🏃‍♀️ at the moment as my

“There's no such thing as bad weather, only unsu

Another cold & rainy run. I like the rain, but don

14-years ago today in Las Vegas, I married this du

Over the last month, we've settled into doing doub

A damp, drizzly & overcast 10k this morning. It wa

I'm running solo 🏃‍♀️ at the moment as my

“There's no such thing as bad weather, only unsu

Another cold & rainy run. I like the rain, but don

14-years ago today in Las Vegas, I married this du

Over the last month, we've settled into doing doub