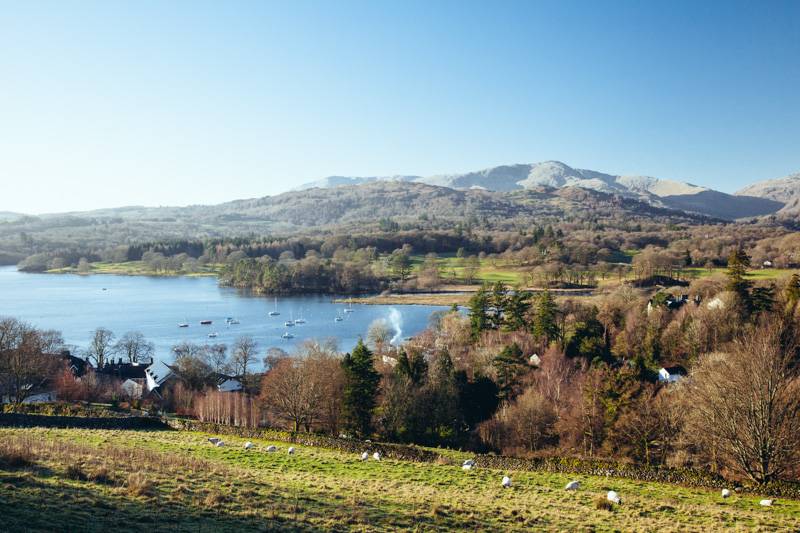 Walking up the windy road of Skelghyll Lane I snuggled down into my scarf, then zipped up my coat as far as it would go. I pulled my gloves over my fingers and then immediately reached into my pockets to find my mittens. Ian looked at me and shook his head. I laughed and gave him a high pitched ‘what?’ all the time struggling to get my mittens on over my gloves. It was the 2nd of January and we were embarking on our first adventure of the year. It was cold. I let out a loud over-dramatic ‘oh no!’ as I realised I’d forgotten my earmuffs – something I forget every time I go anywhere they might actually be needed. But as cold as it was, this would be my preference over chiselling plaster, ripping up floorboards and anything else related to renovating a house. 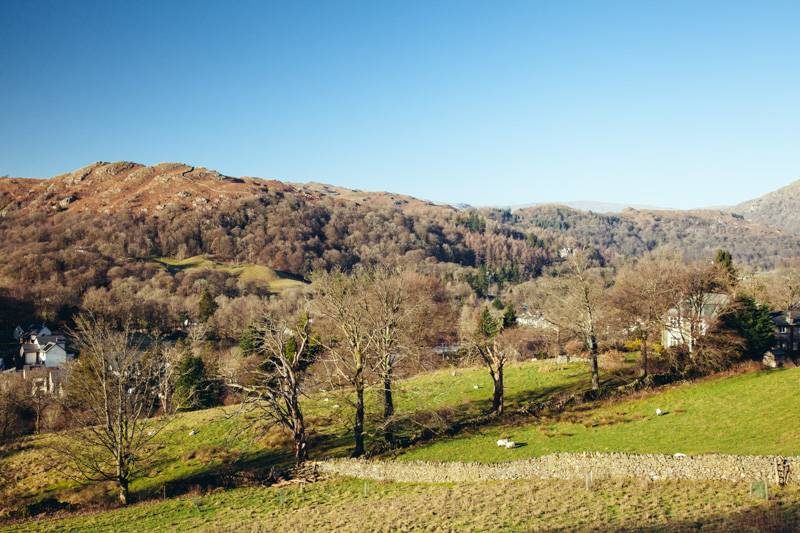 Continuing up the tarmacked road we were protected by the trees as they stood tall, meeting in the middle to form an apex. It wasn’t something we needed, it was cold enough without the added shelter. Striding upwards we caught glimpses of blue sky through the leaves and then eventually, as the foliage thinned out we were greeted with views of Lake Windermere off in the distance. This is one of my favourite spots to stop and take photos, and just like anywhere in the Lakes, the view can vary depending on the weather and time of year. Today, the landscape was a mix of browns and greens and the water looked cold and icy as it lay nestled between the countryside. Looking down at the boats on the water I shuddered – it wasn’t something that held much appeal on such a cold and wintry day. I passed my camera to Ian as I battled once again with my gloves and my mittens. With my camera now safely packed away and my hands snuggly protected, we turned our attention away from the water and back towards our walk. 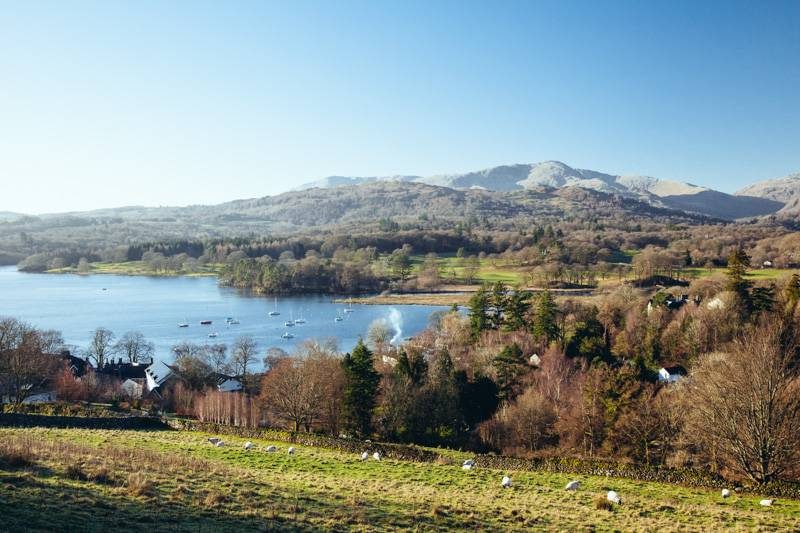 Continuing up Skelghyll Lane we reached the sign for Skelghyll Woods. Although it had been frozen first thing that morning the track through the woods was surprisingly damp. But hidden underneath all that foliage, I shouldn’t have been surprised. To the right, we ignored the pathway leading through the ferns and decided to stay on the main track instead. We followed it straight through the woodland, clambering upwards over tree roots and mud until we reached a gap in the wall on the right-hand side. Passing through the hole we climbed up the rocks and found ourselves stood on top of Jenkin Crag, looking down on Lake Windermere for the second time that day. A short distance from Ambleside, it’s a popular spot for walkers. Some people walk up here just for the view and then make their return, while others use it as a place to grab their lunch before continuing on their way. Today, arriving in the Lakes a little later than planned we did the latter. Acknowledging a couple already enjoying the view, we bypassed them and found ourselves a rock a bit further down, cracked open our jamwiches and looked at the canvas laid out before us. The lake was still with only the occasional ripple, as a single boat went speeding through the icy looking water. Most of the trees were bare, apart from a few immediately in front of us where crisp, orange leaves clung to the branches, refusing to believe they should be on the ground already. 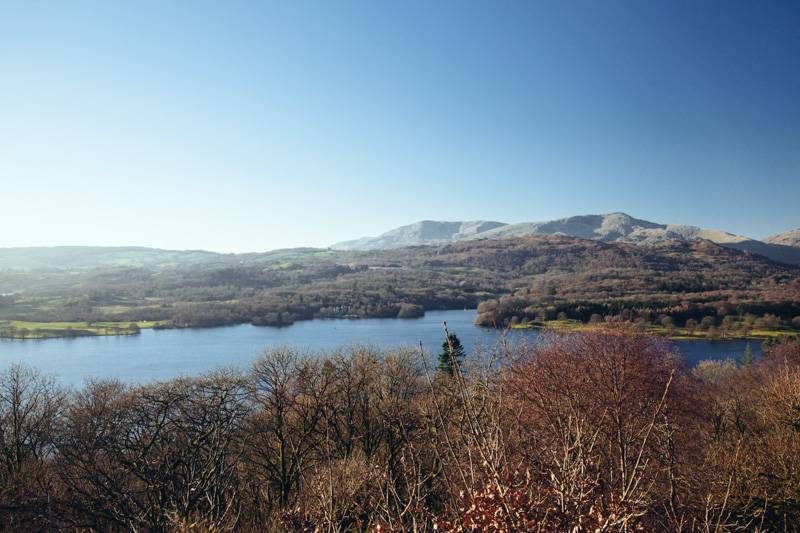 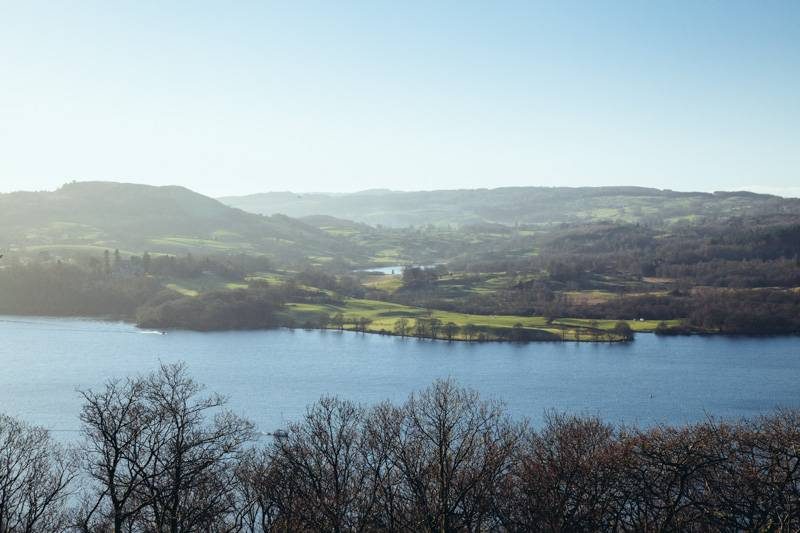 By the time we were ready to leave, the couple who were there before us had already left – but it didn’t take us long to catch them up. We played a game of cat and mouse, taking it in turns to overtake one another. It was only when I stopped to take some photos that I realised they were catching us up, and if it wasn’t for that they would have continued meandering along behind us. After they overtook us for the second time I realised they weren’t in any hurry. They were quietly talking, stopping occasionally to look at the view and then eventually, they sat down in silence on a nearby bench to appreciate the landscape. It was at this point I became aware of the fact I’d been striding along in my usual determined manner. Yes, I’d stopped to take a few photos here and there, but in between, neither of us had stopped to admire our surroundings. I pointed this out to Ian and then immediately turned to look at the countryside in all its glory. There were stone walls, wire fences and wooden gates, tarmacked paths leading through undulating farmland, trees standing strong on the hillside and sheep scattered throughout the fields. The sky was blue with barely a cloud in sight and the wintry sun hung low in the afternoon sky. Life was good. 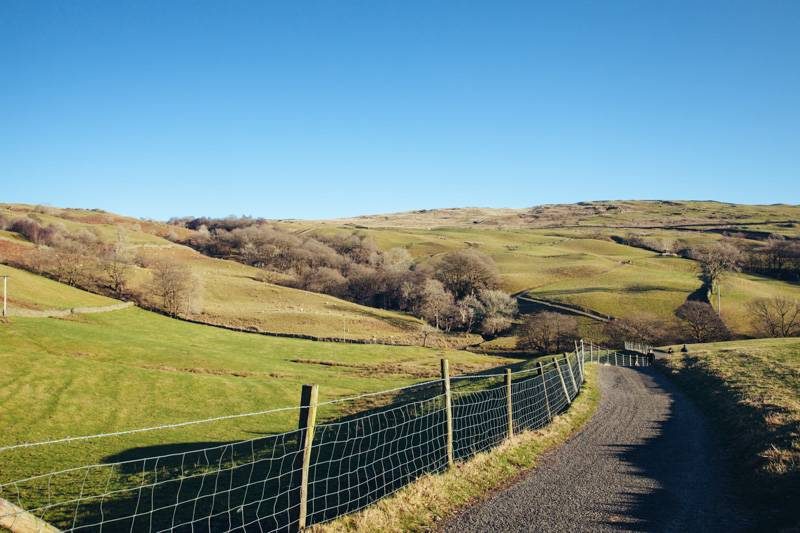 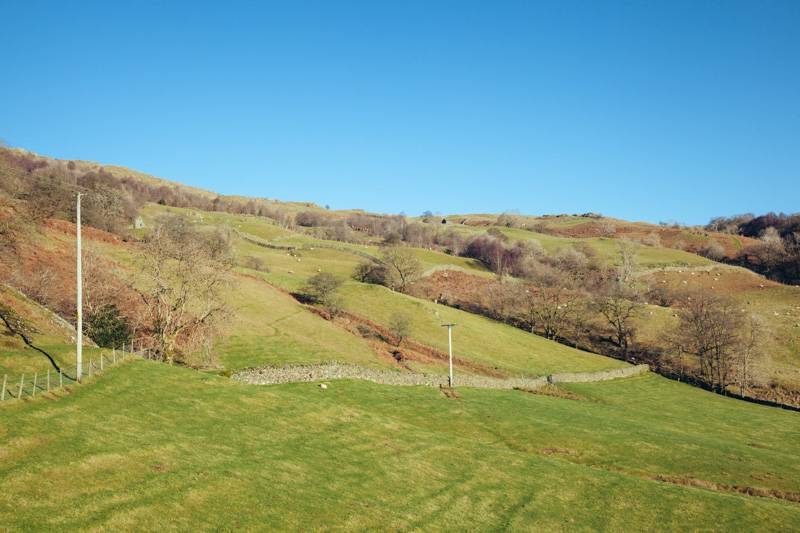 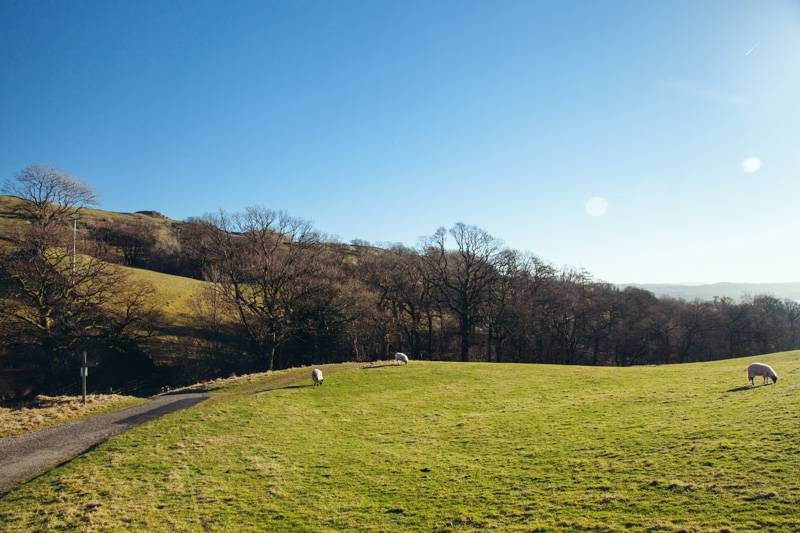 We stood for a few moments breathing in the cold January air, looking around at the world before us. Having the attention span of a goldfish, it didn’t take me long to decide we should continue on our way. We followed the path through the rolling hillside and as we approached two wooden gates we stopped for a moment. I’d love to say it was to appreciate more of the countryside, but unfortunately, it was so we could decide in which direction we should be heading. After spending a couple of minutes watching people come and go we decided it was the right-hand gate, and as we passed through it were met by a sturdy looking tree standing alone on top of a hill. A lone tree is one of my favourite things to photograph, so much to Ian’s dismay I asked him once again to get my camera out of my bag. He stood there with his bored husband look spread across his face while I found myself lost in the moment. Over many years of standing around waiting for me to take a photo, it’s a look he’s perfected down to a tee. 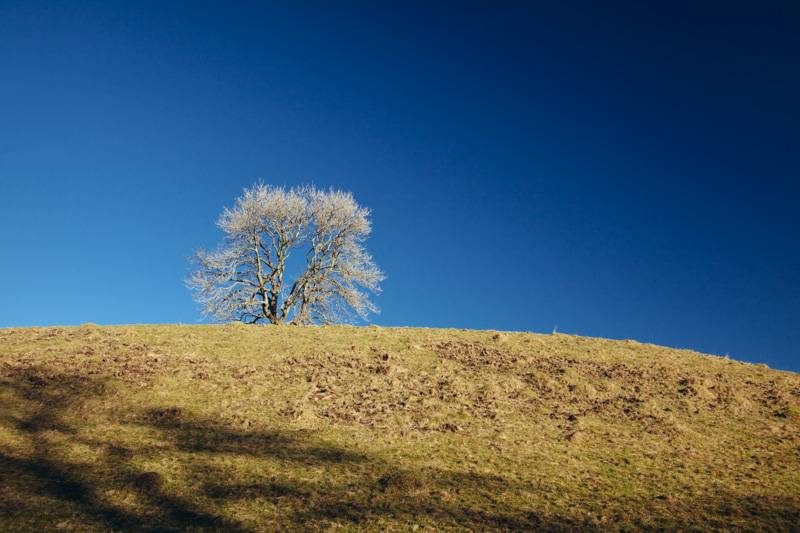 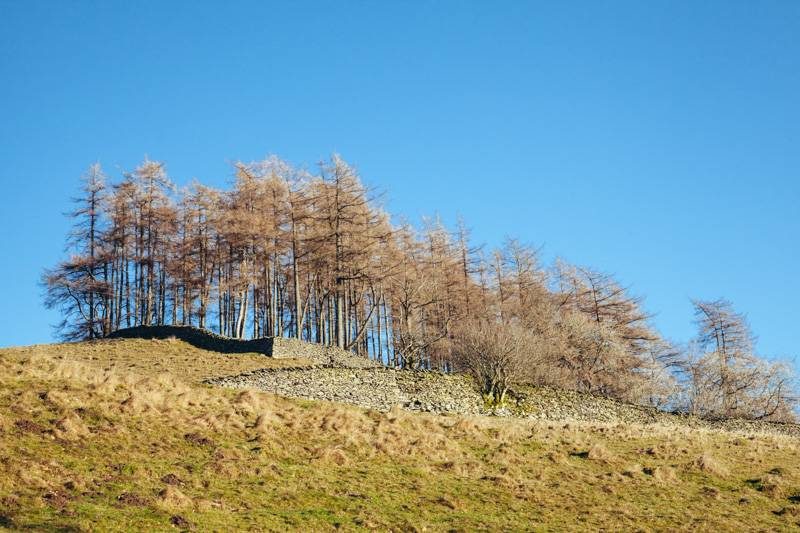 I decided to keep my camera out for a while to save all the stopping, starting and bag rummaging, and once again we continued on our way. We weaved our way around farm houses and tracks, walked carefully along narrow roads, all while dodging cars and other walkers along the way. When we started to descend a particularly rocky trackway, I decided it was time to put my camera away and once again Ian started rummaging in my backpack, making sure my equipment was secure. 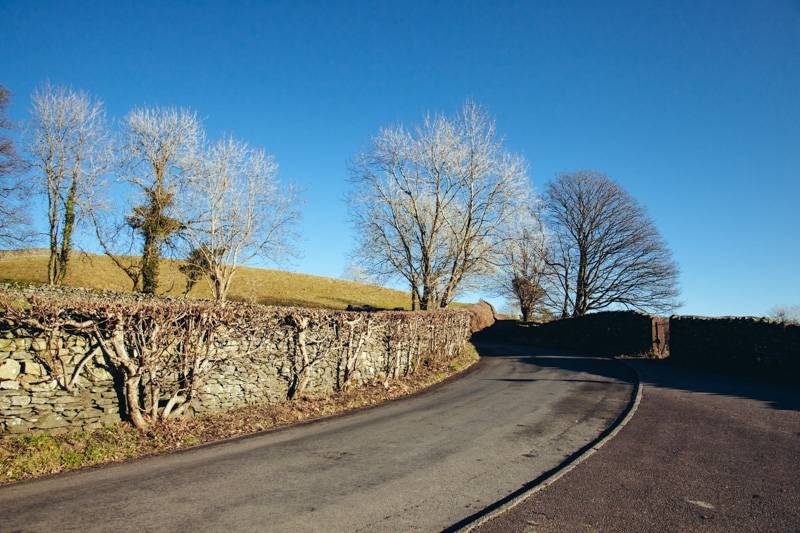 If you’re familiar with the Jenkin Crag walk, you’ll know that the guidebooks suggest walking down into Brockholes – which is something we’ve never done. We always turn right off the track and head through the woods, but today we decided to take the detour. It was a narrow, soggy pathway only just wide enough for a single person, so as we met other walkers coming in the opposite direction, we found ourselves squidging up close to the stone wall trying to make as much room as possible. When we reached the bottom of the track we headed out through a gate, which two girls coming in the opposite direction carelessly left open. Looking like they should have known better, they made no attempt to shut it. Rule No. 1 of the countryside – never leave a gate open. As we turned left along the concrete path we soon reached a road and both had a hand to forehead moment when we realised where we were: Brockholes Visitor Centre. Passing it on the main road every time we go to Ambleside, neither of us had made the connection. It was full of families with kids playing in the high wire tree tops, so we had no intention of staying – only long enough to drink a cup of tea, eat a snack and use the toilet. With an empty bladder and replenished with food we found our way back up to the woods. We traipsed through the damp and earthy woodland, jumped over a stream and then found ourselves on a narrow grass track between fields of sheep. Striding along in single file and squinting against the afternoon sun, we soon found ourselves at the kissing gate behind The Low Wood Bay Hotel. We’ve passed over the field here many times over the years, but now, apparently, the right of way had changed. The hotel is expanding, and the footpath that leads from the back of the hotel through to the front is no longer accessible to walkers. Instead, we must walk round. But being a walker, having already covered nearly 5 miles, that’s not really a biggie – right? 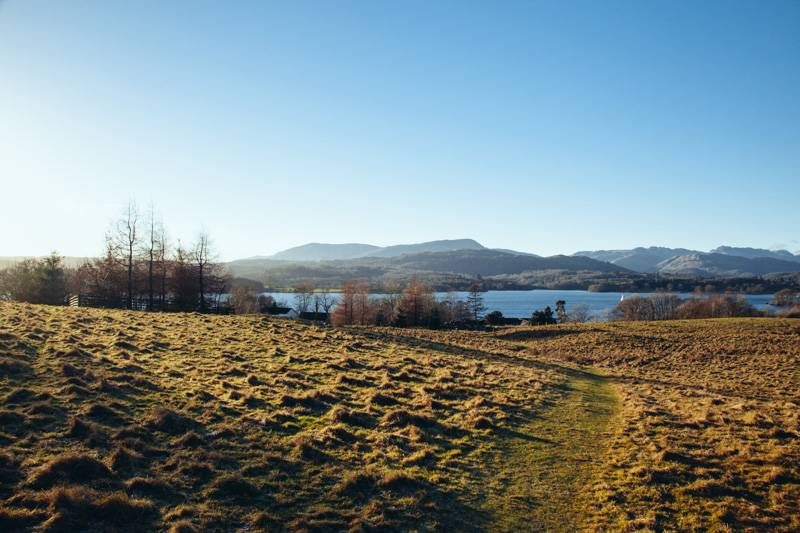 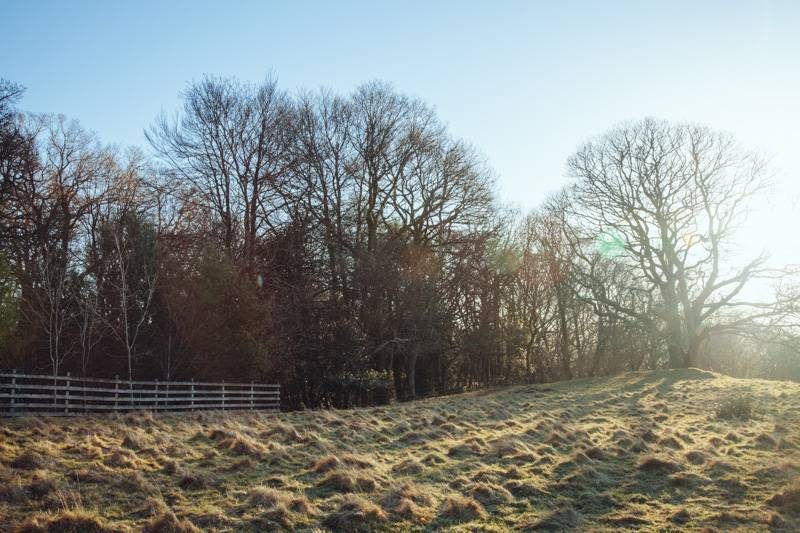 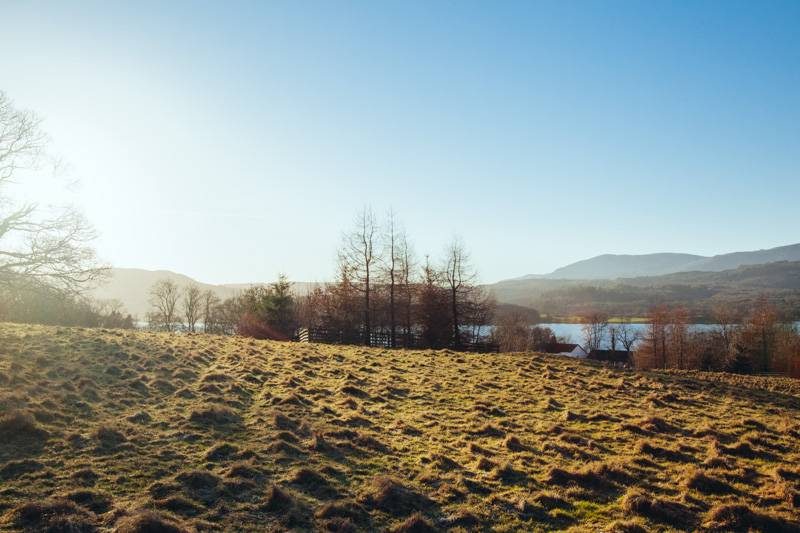 So, we continued on, walking along the field looking at the trenches and passing by huge diggers that hadn’t started work yet after the Christmas break. After nearly losing our footing a few times, and sinking into various parts of the ground, we made it safely back to the road. This time, the traffic was queuing the other way and we waited patiently as day trippers and holiday makers crawled at a snail’s pace trying to get out of Ambleside. The afternoon sun started to waiver and with it, so did the temperature. It was the perfect time for us to be heading back to the car. When we finally arrived at the car park it was only half full and I imagined the recently departed cars now crawling along the road, queuing in traffic on their way out of the town.

As we pulled out of the car park I snuggled down into the passenger seat, suitably satisfied with our first adventure of the year. And although we ended up in the line of traffic with everyone else, I had to be grateful that I wasn’t stuck at home chiselling plaster or ripping up floorboards. They were all things that could wait until tomorrow.

5 Tips For Living in a House While Renovating It 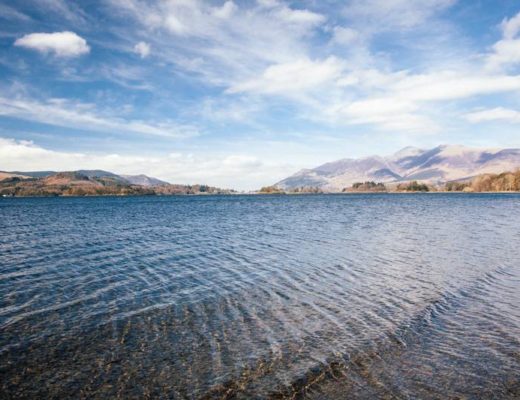 How to Spend 4-Days in the Lake District